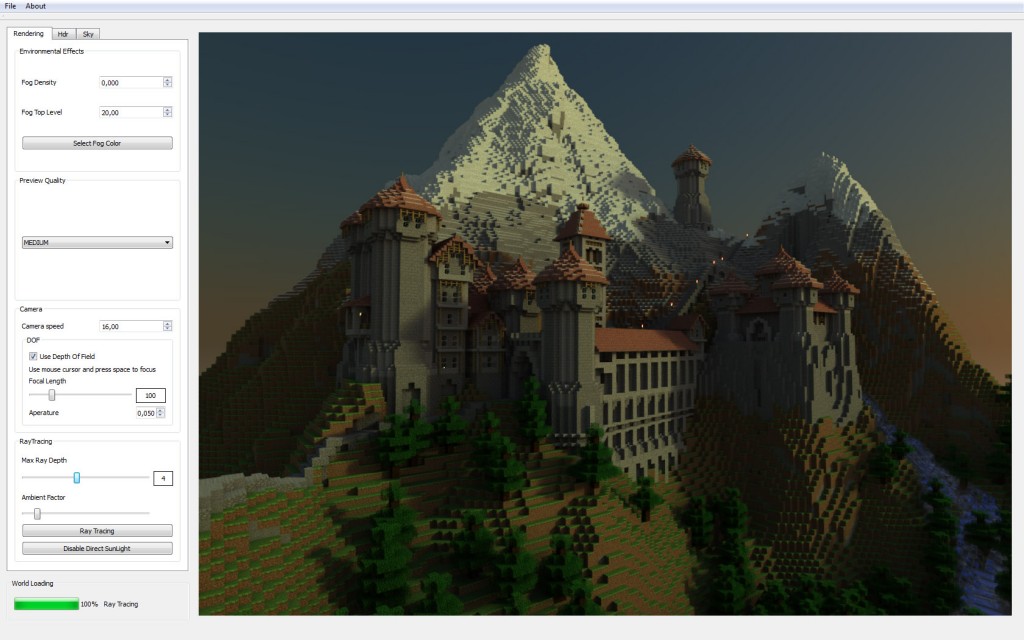 “Hello friend and welcome to the Minewizard”

Here you can turn your Minecraft creations into beautiful images that you can show to the world. I know you have been spending countless hours building and wouldnt it be nice to make some cool images for wallpapers and such. But it is often hard to work with rendering software, there is a lot of parameters and typically it takes a long time to make an image.. and then something is not like you really wanted it to be. I have tried to make a very simple renderer that only renders Minecraft, and that allow you to change parameters on the fly.

But before considering  installing the MineWizard software, please note that there are some pretty tough hardware requirement!

So what you need is: Nvidia Graphics card 660 GT or better, sorry you Amd guys there is a bug i dont have the time to fix.

Still here? ok, very nice. So what does this program do?

Basically MineWizard is using ancient tech sorcery to conjure the images, this is called Ray Tracing. Like some spell the program shoots rays around your Minecraft world to figure out where the light goes. This is a pretty demanding job, because you need millions of rays to create a single image. But by using commanding your graphics card we can speed things up and now you can have an image in a matter of minutes. 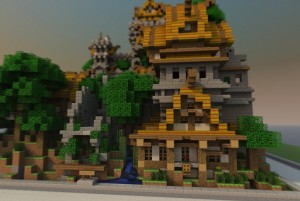 Rendering that took a couple of minutes

There is a nice installer, but you windows might complain that the software is from an unknown publisher. But this is because it is freeware and we dont have any money to sign it.. but anyways

If you manage to install give it a try and tell me what you think, or even better post your images!

But the default world is pretty dull, so in order import you own worlds you need Mineways :

This is a fantastic piece of software that allows you to export your minecraft worlds to different formats.

For Minewizard you need to export for rendering.

1) Open Mineways and open you world and select the region you want to make images of. 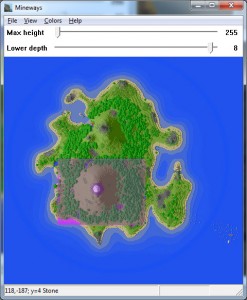 Notice due to some memory alloction issues, you cannot select the whole world!

Then you need to export as an obj file. This is done by clicking File/Export For Rendering and these are the settings that i use. 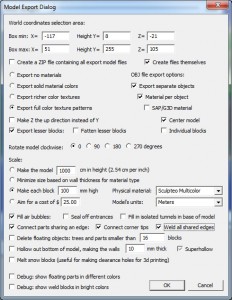 Cool, then you have an obj file containing all the 3d info of you Minecraft world..

Then load this file with MineWizard and you are ready to render.

Minewizard should be pretty easy to use, but hey i am the programmer so what do i know 🙂

But there is basically two states: basic rendering mode that sort of looks like the original Minecraft rendering, but without any light.

And then raytrace mode, where the light is rendered naturalistic. In ray trace mode you can preview the changes like rotating the sun and

see it in realtime. So you can compose the screenshot in the way you really like. 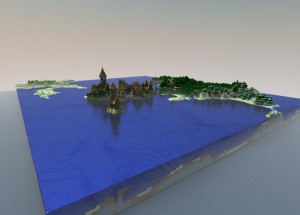 This is the size of worlds you can render.

There is one trick i would like to share, that is a new feature: Depth of field (DOF)

So like in a real camera you can focus on objects and set the lens parameters so you get nice DOF.

This is cool if you would like to focus on a specific part of you world like in this image. 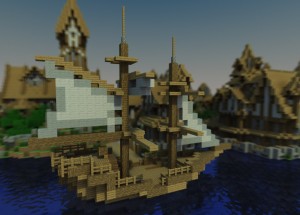 Here i focused on the ship, an you do that simply by point at the object where you want to foucs and the press space.

Wupti then the rendering auto will foucs on that depth.

There are some other things but i will get back to that later. 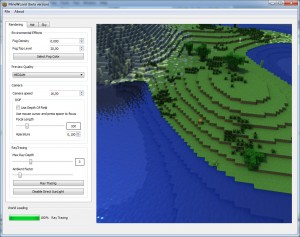