In this project we helped Xcelgo with a brand new custom DirectX 11 renderer as a replacement of their existing fixed function DirectX 9.0 renderer.

Xcelgo provides virtual automation software for 3D modeling along the cycle of automated material handling systems – Like airport baggage handling or larger warehouse storage systems. The purpose of their product is to eliminate the risks involved in building these large and very expensive systems, by allowing simulation and modelling of the system up front.

Experior, the 3D modelling system by Xcelgo, is built around a fixed function DirectX 9.0 pipeline programmed in C# though wrapper code. DirectX 9.0 is characterized by a lack of scalability because of the driver overhead imposed by the dated rendering paradigm. The 3D simulation is built from a large number of user generated primitives which are able to freely move around the scene. Each of these are being rendered individually which causes the GPU and CPU to lockstep.

The fixed function rendering pipeline supports only very limited lighting techniques, hence limiting the visual appeal of their presented scenes. And even in engineering type visualizations, the visual quality gets attention and opens for expanding the customer base.

Xcelgo wanted to prepare for future scenarios with larger models and a more easily maintained rendering framework – and decided to update the rendering pipeline to a modern shader-based DirectX 11 pipeline. In close collaboration we have designed and implemented a completely new rendering pipeline. 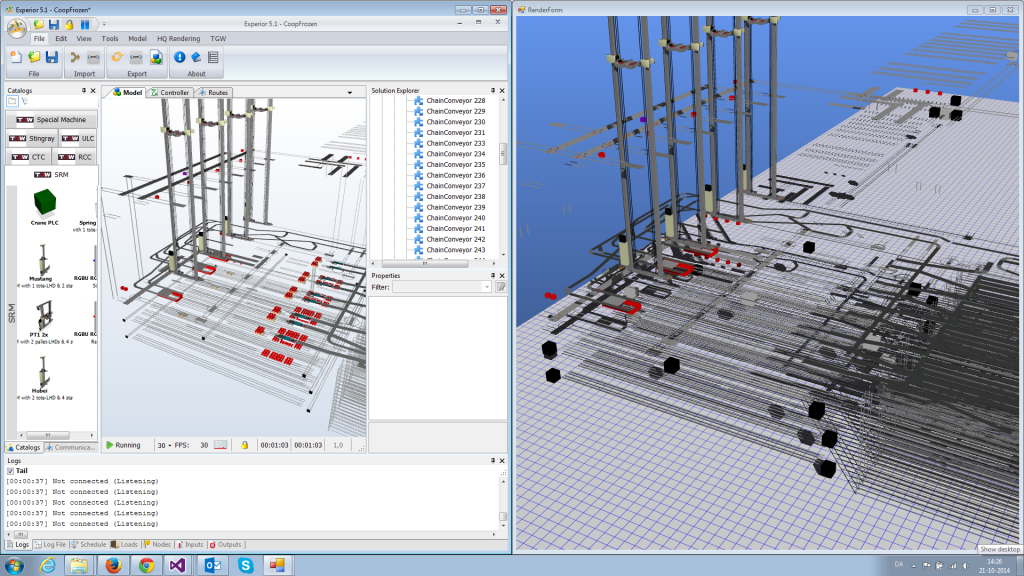 The new pipeline supports a lot of features which will help Xcelgo further push the limits of virtual automation:

* DirectX 11 rendering pipeline written from the bottom up based on Xcelgos domain knowledge about their customers wishes.
* Intelligent optimization of scene rendering to avoid expert rendering knowledge when designing the scene geometry.
* Threaded rendering freeing the rest of the workstation to do simulation.
* Massive increase in number of dynamic objects that the system can handle. Hundreds primitives -> Tens of thousands skinned and textured models.
* Support for instanced rendering of skinned robots.
* Support for fully detailed CAD line renderings in full resolution to better guide modelling engineers when building systems.
* Modern cascaded shadow mapping solution which fully envelops the scene in crisp shadows.
* Rasterization-based pixel perfect picking of objects in the scene vastly improving runtime performance when selecting objects.
* Modern surface shading much improving the visual aesthetics of the scene.

The project is now completed and Xcelgo is hard at work finishing the integration of the new rendering which should be complete in time for Experior 6.0.